Thank you Roanoke Valley! Community School’s Strawberry Festival has been voted the top choice, Platinum, as the Favorite Annual Festival according to The Roanoker magazine’s Best of 2017! Read the Issue 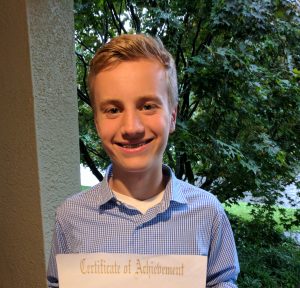 Congratulations to Noah Gettings, Seminar class of 2016. As a freshman at Patrick Henry High School, he just received the Outstanding Achievement Award for Spanish IV. Noah, who also attends the Roanoke Valley Governor’s School for Science and Technology, has studied Spanish since starting at CS as a preschooler. According to his father, Michael, Noah’s […]

Paige Johnson (Seminar class of 1999) visited campus last week. She has just returned from England where she completed a master’s degree at Oxford University in biodiversity, conservation and management. She is starting to look for jobs and hopes to settle in the Washington, D.C., area. Alex Lesniak is excited to report that her science […]

Alex Lesniak, who attended CS from 2003-2009, will be back on campus this month. As part of her research for a gender bias study that she is conducting for her classes at the Governor’s School of Math & Science, she will be observing classes here at CS. Alex is currently a senior at Lord Botetourt […]